A conceptual model of Text, Documents and Work - Part 1

As part of the thinking I'm doing for THE BOOK, there is a collaborative brainstorming with a colleague of mine, Geoffroy Noel,  who is an expert on modelling and knowledge representation. We have started a journey which we don't know where it will take us to, but it looks like a fun journey, so I thought of sharing it!

First the context: I will only talk about texts, documents and words in a textual scholarship framework, so I'm not talking about the creation of texts or texts transmitted orally or other objects, but of cultural heritage texts that are written.

Second the entities. In this model, at least for now (we are at the beginning only) there are three entities:
The document is a physical object that has some text on it.[1] So maybe a better name for it could be verbal text bearing object,  or VTBO, but I found the expression too long and the acronym too ugly, so I'll stick with document for the time being (I may change my mind).

A document is defined by two sets of characteristics:
It has also other characteristics (it can be found somewhere, for instance), but at this stage I want simply to define it at a general level, the details will come.
Documents have observable dimensions, or as Michael Sperberg-McQueen put it, an infinite set of observable facts, which, I add, can be grouped into sets of facts or dimensions, motivated by research objectives. Each dimension has a set of document features it draws from. Features are directly and fairly objectively observable facts from the document. For instance, the Palaeographical Dimension will be interested in the way (Feature) a letter (Part of the document) is written. The following is a non exhaustive list of these dimensions potentially observable in a document.

As I said, there might be many more dimensions (and I think I will add at least another one shortly, when I'll introduce the concept of work, but for the moment I'll leave it like this), as there are infinite sets of fact which can be observed on the object.
Another way of seeing these dimensions is to interpret them as channels of communication (or Contacts), each one with its own codes (a Meaning encoded as Feature), as they are made of signs which, in the intentions of their producers (the Senders) where meant to communicate something (the message) to someone else (the Receivers). I have used the communication model to talk about text transmission here.

Now, these Dimensions are only potentially available, and until someone reads and inspects the document for some reason, the document itself has no particular meaning: it is an inert object with no particular significance. The place where the meaning are conjured is the text which come into being when the Document is read by a reader. Or, the Document transmits its message when an interested Receiver can be found.

The Text then is meaning(s) that readers give to the subset of dimensions they derive from a document and that they consider interesting. As a consequence, Texts are immaterial and interpretative. Many people can read from the same document and understand slightly or radical different things, depending on their culture, their understanding, their disposition, their circumstances, etc. There are facts in the object, but their meaning is not factual, is interpretative. For one reader the only dimension could be the semantic (what the text means, the plot, who's the murderer), for another could be the artistic value (maybe she/he cannot read the words written in an old language, but he/she can still admire and make (some) sense of the miniatures).
Editors are very special types of readers and are likely to be engaged with many dimensions at once, but then, according to their scholarly approach and the purpose of their editions, they will weight differently the evidence provided by each of these dimensions. My previous post has tried to use the codicological dimension as way to position theoretical approaches and editorial outcomes. And in my article of 2011 I have used the purpose of the edition as a parameter to chose the features of the document.
So far the model looks like this: 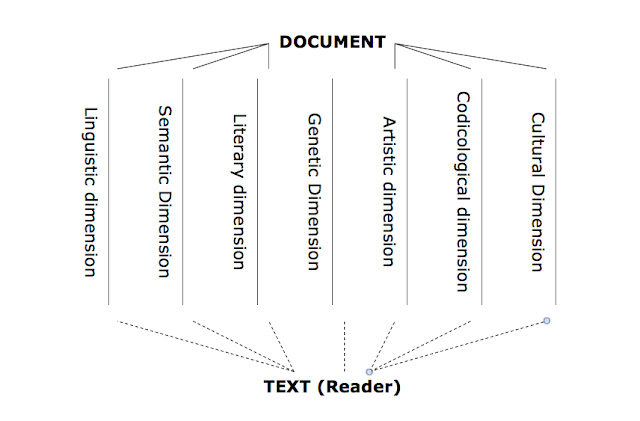 If we reconsider then the communication model I have mentioned above, we could then define texts as

A text is a multidimensional written message that is made by set of meanings transmitted by a document by the mean of various channels, each of them with its own codes which are potentially understandable to at least one group of receivers holding the capabilities or the interest to decipher at least one of such codes.

Ok, I think I'll stop here for the moment. Next step will be the Work.

[1] I note here that his is more or less the same definition given by Huitfeldt and Sperberg-McQueen 2008: "By a document we understand an individual object containing marks. A mark is a perceptible feature of a document (normally something visible, e.g. a line in ink)"p. 297. The difference between these two definitions is that I explicitly say "text" and not "marks.